While this title looks more akin to a program that we offer at the San Francisco Hillel Jewish Student Center, it is actually an association that has been going around the Internet with regard to the Tent Revolution in Israel.

The phrase came from controversial politician Avigdor Lieberman, who claimed the economy can’t be that bad because he couldn’t find a free table in a Tel Aviv restaurant. Carlo Strenger sums up the movement in an article in the Jerusalem Post. 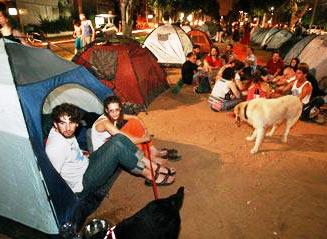 Unlike the uprisings in Israel’s neighbors, this is not about toppling an autocratic political system. Whatever your view of Israel and its politics (and there is a lot to criticize), Israel is a democracy. In fact, one of the biggest problems in the Israeli democracy system is the low threshold that allows many people/parties to get a a few seats in the Knesset (Parliament) and hold the bigger parties to political ransom.

Ironically, the tent cities that are appearing all over Israel reflect this problem. There is no central leadership, no specific demands. This is a plethora of single-causes and grievances expressing their frustration. This adds an awareness of social injustices inherent in Israeli society, but it is difficult to bring them together in one thread.

The sushi analogy reveals something that we should take note of here in the US. Both countries have a growing gap between the working class and the wealthy, but the new recession has hit the middle class hard.

Strenger explains the growing frustration of the middle class and the young professionals in his excellent article by highlighting on the exploitation of graduating psychologists who will work for many years just to bring themselves to a financial position where they can save for their future. 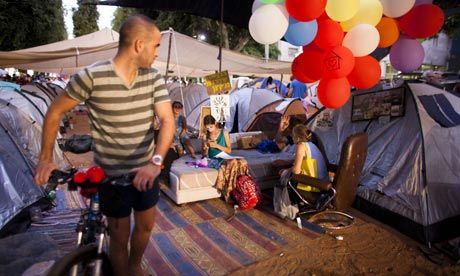 While I don’t want to belittle their individual grievances, I can’t help feeling that the lack of strategic focus and leadership means that the Israeli tent movement will prove unsustainable. While there are many differences between Israel and the US economy and class structure, a middle class that cannot flourish means an economy that only allows for the rich to get richer at everyone else’s expense.

In this Israel and the US are very similar. Perhaps it is time to begin erecting tent cities over here.