A Great Book for Writers

Whenever I speak to groups of writers, I have a copy of Stephen King’s On Writing on hand to wave in people’s faces. I personally own a paperback and the audio tape and dutifully listen to the latter once a year.

But I have just finished reading another great, thin and to-the-point book about the craft. Since beginning to write fantasy with my eldest son, I have been reading in the genre and Terry Brooks is considered one of the best. I have consumed four of his tomes thus far and was delighted to see that he has a book called Sometimes The Magic Works – Lessons from a Writing Life. 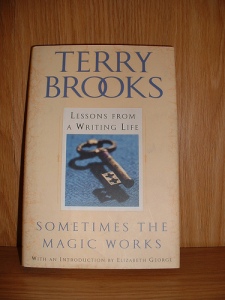 Brooks divides his book between an autobiography (he only relates to his writing career but it includes his writing the Star Wars novel The Phantom Menace) and a toolbox for authors. Like Stephen King, his advice for writers is no nonsense and straight-to-the-point. You can read it in a few hours and refer back in the future.

I want to share something from the beginning and something from the end. I read his opening chapter – I Am Not All Here – to my family. Brooks talks about living in two worlds and how he often zones out of this one and into the fantasy story that he is writing. I thought it was cute, and my family certainly found it familiar. Since then I have realized how often this happens. It can be difficult to leave the characters on the hard drive and not drive around with them.

The second part I want to share with you is at the end. There is a list of about thirty short sentences, decelerations of Brook’s writing philosophy. Here are a couple.

“If you do not hear music in your words, you have put too much thought into your writing and not enough heart.”

“If you don’t think there is magic in writing, you probably won’t write anything magical.”

And his final words:

” If anything in your life is more important than writing – anything at all – you should walk away now while you still can. Forewarned is forearmed. For those who cannot or will not walk away, you need only remember this. Writing is life. Breathe deeply of it.”