With the world’s eyes focused on Libya, one string of events last week went under the radar. Led primarily by students, peaceful demonstrations were held throughout the West Bank. Most exciting, they began in Gaza, where mainly young people demanded that Fatah and Hamas stop the internal war and join together to build a state for Palestinians.

Hamas violently seized control of Gaza, publicly executing and murdering Fatah employees and civilians. Fatah, in return, has cracked down on Hamas supporters in the West Bank. The violence and denial of basic human rights for those who support openly one side or the other, is bad enough.

But it has repercussions beyond their own border. Israelis, even the most left-wing, admit that they cannot imagine negotiating a final settlement with one side without the agreement of the other. Any comprehensive peace agreement would include an implicit agreement to cease violence and the destruction of the other people. With both countries so small,  everything is of strategic significance. The stability of a Palestinian government is vital to any validity of a peace agreement. Not everyone in Israel agrees with this, however. 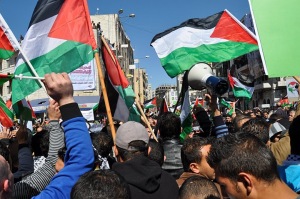 The world should pay more attention, offer more encouragement, and help bring about the stability of a Palestinian government. It is probably the biggest obstruction to final negotiations. The Palestinian youth should be praised for their resilience and their vision. It is encouraging to know that true peace partners are out there on the streets.