The Progressive Jewish Alliance (PJA) was founded in 1999 to create “an authentic progressive Jewish presence in the campaigns for social justice in Southern California.” The PJA has a double agenda.  Within the Jewish community (the LA Jewish community is the second biggest in the US) they serve to invigorate and motivate the Jewish social progressives. As a Jewish organization they serve as a vehicle to educate, advocate and organize around a broad array of issues including diversity, equality, justice and peace. In February 2005, the PJA opened a San Francisco Bay Area chapter, which is proving just as impressive.

Why do we need a Jewish progressive organization? Why not just join up with activists of all races, religions, and classes? I believe the answer lies in honoring our own rich heritage of social activism. Jews have been involved in high proportions in the anti-Apartheid movement, the civil rights struggles and the democratic agenda in almost every country where Jews can live freely and openly.

Jewish identity, whether from positive or negative angles, is strong within our psyche. Jewish tradition teaches that we have an obligation to work for Tikkun Olam (fixing the world). As the PJA bumper sticker says: to kvetch (complain) is human, to act…divine. 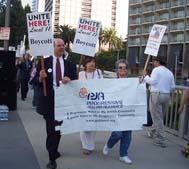 As a minority, even the tolerant climates of California, Jews gravitate towards Jews. For those of us who do not bond in the prayers, study and rituals of our religion, the drive to fight social injustices can be a rallying cry. The synagogue, the foundation of Jewish fabric for so many generations can be replaced for many by such agencies as the PJA, the American Jewish World Service and Jewish Funds for Social Justice (more on these great organizations another time).

“We fight for economic justice by educating Jews about our obligation to stand with the working poor, and then we organize the Jewish community to join in campaigns to improve working conditions and secure a living wage for low-wage workers.  We work to reform the criminal justice system and to promote a more just and humane system of restorative, rather than retributive, justice through a ground-breaking program that trains volunteers to mediate between non-violent juvenile offenders and their victims throughout Los Angeles.  We work to promote understanding and tolerance by facilitating several tracks of Muslim-Jewish dialogue.

Through organizing around the values of tikkun olam, through encounter with Jewish sources and learning, and through strategic social justice work, we work to create a Jewishly-literate membership that examines core Jewish values in a new way, and to “bring back” to Jewish communal life many individuals who would be otherwise disconnected.  Under the rubric “tikkun ha ir, tikkun olam” (repair of the city, repair of the world), we also participate in the broader community coalitions working to build a better California (and America) for all of its inhabitants.”
——————————————————————————————————-

One thought on “Organizations That Matter: The Progressive Jewish Alliance (PJA)”