Movies That Matter: Good Will Hunting

Good Will Hunting is a guy movie, without the guns and superhero capes. It is an honest look at men striving to fulfill their own potential. 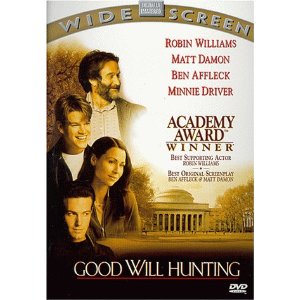 Matt Damon stars as a young janitor at an elite Boston university. At night he hangs out with his friends boozing and picking fights. But the young man is a genius and proves it by solving an impossible calculus problem scribbled on a hallway blackboard as a challenge from faculty to students. He reluctantly becomes the prodigy of an arrogant MIT professor and promptly gets into trouble with the law for fighting.

His only way to avoid charges and jail time is to see a psychologist (Robin Williams). What begins as cynical mocking by both doctor and patient evolves into a deep mutual respect as each discovers how they are trapped by their respective tragic pasts.

The story works because both men have their shortcomings, their inabilities to communicate and be totally honest, and their willingness to pick themselves up.

Our society is littered with men who are broken shells. They crumpled under the weight of expectation of their family or society, or they set themselves up against insurmountable odds laid down by fictional Hollywood mentors. When alienated from those who could help them rise, their only friends become drugs, alcohol, violence, or screens.

We need to find other solutions, redefine manhood and status. As the economy downsizes there will be even more men who find themselves sitting on the sidelines.  We all need to see this movie.