This was the title of an editorial in the New York Times last week. In the article, the author refers to a deal made with President Bush’s government in which the multinationals offered to bring back billions of dollars to invest in the US economy, building new plants and stimulating employment. 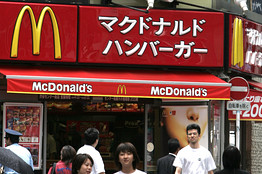 Congress passed the Homeland Investment Act, which allowed companies to repatriate some $300 billion in 2005 and pay only 5.25 percent in taxes (instead of 35% which is the corporate tax rate imposed on overseas profits when they are brought into the country). The multinationals got their tax breaks: the stimulus failed to happen. Almost all of that money found its way to the shareholders.

Now, according to an op-ed in the Wall Street Journal, the chief executive of Cisco, John Chambers, and the president of Oracle, Safra Catz, suggested that American multinational corporations have about $1 trillion stashed abroad and that this money could be brought back for the general good if taxes were again lowered to 5%.

The audacity of big business astonishes me – and I wrote a book about their behavior. I should read it again. That they were able to get away with this in ’05 is hard enough to stomach. But that they feel they can do it again is … well you can slot in the appropriate word.

It seems that the Obama administration does remember how the government was fooled and is not showing any interest. Fair game, but I can’t help wondering where these multinationals get the chutzpah to even make the suggestion. ——————————————————————————————————-

3 thoughts on “Fool Me Twice?”