A GIANT Step for Left Coasters

This is not a sports blog and I am cruelly aware of the credibility an Englishman lacks passing comment on a baseball game but…there is something magical when a city gets behind its team, when in the midst of an economic depression, in the build up to a mind-numbing mid-term election, and when it has suddenly gone from heatwave to pouring rain...the team delivers!

“The Giants shouldn’t have even made it this far into the post season.”

“They are just a makeshift team of misfits.”

“One bowler is a long-haired school kid who probably arrived at the stadium on his skateboard, another colors his beard.”

Hey who cares! This is San Francisco – take it or leave it. But the Giants are going to the world series.
﻿ 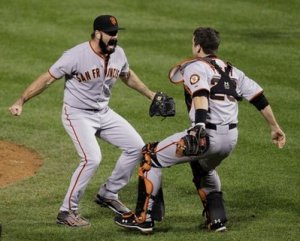 Alon Shalev is the author of The Accidental Activist and A Gardener’s Tale. He is the Executive Director of the San Francisco Hillel Foundation, a non-profit that provides spiritual and social justice opportunities to Jewish students in the Bay Area. More on Alon Shalev at www.alonshalev.com

4 thoughts on “A GIANT Step for Left Coasters”